March 21, 2019 – Vancouver, B.C. – Returning for its eighth year on April 6 (Saturday) and featuring over 400 jobs, the Vancouver Digital Entertainment Career Fair expects more than 3,500 professionals to meet with hiring representatives from Vancouver’s top companies. The Career Fair is free to attend, taking place from 10:00 a.m. to 3:30 p.m. at the Vancouver Convention Centre East (999 Canada Place; Ballrooms A, B and C). Job-seekers may register through Eventbrite at https://yvrdigitalcareers2019.eventbrite.com or on-site upon arrival. Presented by VEC and powered by Netflix, the Career Fair is North America’s largest annual dedicated professional hiring fair for the digital entertainment industry.

“Vancouver is one of the best places in the world to find well-paid jobs in the creative industries, and is where the world comes to collaborate and innovate with digital media,” says Vancouver Economic Commission (VEC) Chief Executive Officer Catherine Warren. “There is huge economic potential where emerging technologies meet creative demand, and Vancouver leads at this intersection.”

Vancouver’s strength in tech, digital entertainment and innovation has given it a knack for developing award-winning tools of the trade, attracting the best talent, and growing emerging industries such as virtual and augmented reality (VR/AR) and esports at a blistering pace.

“Last year’s Career Fair attracted well over 3,000 attendees, who met with more than 50 exhibitors,” says Nancy Basi, Executive Director of Media & Entertainment at VEC. “Over 40,000 professionals work in Vancouver’s digital entertainment sector, but the industry boom creates jobs faster than locals can fill them, which is why we also welcome fresh talent from surrounding regions like Edmonton, Calgary and Seattle.”This growth comes as no surprise to the VEC, which forecast that local annual film & TV industry spending will surpass $4 billion in value in 2019. VEC also predicts that the value of Vancouver’s visual effects and animation industry – where Vancouver leads the world – will exceed $1 billion for the first time this year.

VEC attracts creative, global job-seekers with its annual digital entertainment career fair, an event that showcases abundant opportunities to move up and to move across sectors and establish an international profile. “Whether you are in animation and visual effects, games, VR/AR, post-sound or physical production, there are a lot of transferable skills. Come with your portfolios, demos and reels pre-loaded on a device or thumb drive,” advises Basi. “These studios don’t usually look for paper resumes – and definitely not at this career fair.”

Even professionals not actively searching for jobs will find something, including a Speakers Corner that features deep dives and deconstructions of award-winning projects. One of the objectives of the Career Fair is to help ambitious professionals explore new or emerging business opportunities, and important trends such as 360 production and equitable workplaces.

This industry has been one of the fastest-growing in Vancouver over the last few years, providing huge spin-off economic impacts, a global profile and diverse job opportunities – including low-barrier ones – and contributing significantly to economic resilience in the region. 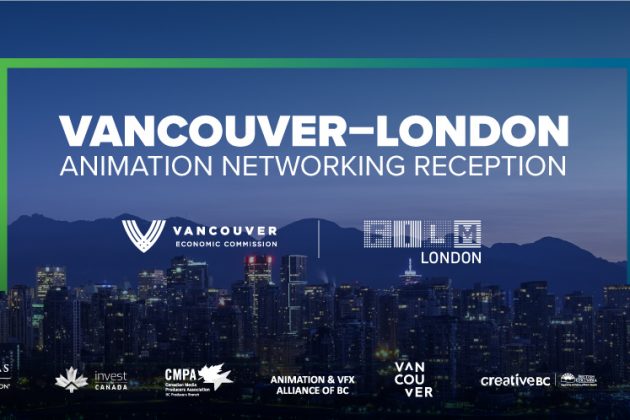 London & Vancouver draw closer in wake of recently inked Creative MOU Vancouver, Canada / London, England – This Thursday, […]
Do NOT follow this link or you will be banned from the site!